Salamanca Hall, inaugurated in April 1994, is a concert hall with a full-size pipe organ dedicated to classical music performances. In the so-called “shoebox style,” which is best suited for classical music, the hall is designed in a Renaissance style using oak wood in many parts of the interior finishing to create a warm, deep feeling.

Cultural exchanges between Gifu Prefecture and the City of Salamanca, Spain, started when an old, Renaissance- style, long-disused pipe organ of the New Cathedral of Salamanca, called a "mute organ," was restored by Mr. Hiroshi Tsuji, an organbuilder based in Shirakawa town, Gifu Prefecture, and the Prefecture cooperated with the project. The pipe organ, the symbol of Salamanca Hall, is a beautiful replica of the restored organ at the New Cathedral and the first pipe organ of the Spanish style built in Japan. When the new concert hall asked the public nationwide for suggestions for its name, the most popular suggestion was "Salamanca Hall," reflecting the history of these cultural exchanges.

Many artists visiting Salamanca Hall first praise its excellent acoustics. The audiences feel enveloped with heavenly music and have blissful moments. It is these wonderful acoustics that make us most proud.

The shoebox-style design is said to be best suited for performances of classical music. The reverberation time of the Hall is ideal: 1.7 to 1.9 seconds. Major reflective surfaces such as the ceiling and side walls are given moderate irregularities to help high frequency sounds (such as violin) diffuse, while reverberation adjustment curtains are available for the artists to suppress sounds whenever necessary. In addition, sound-absorbing walls are available on the walls of the stage's sleeves so the artists can use them to their preferences to ensure high-quality acoustics.

Overview of the Hall

The pipe organ, the symbol of Salamanca Hall, is an ingenious combination of the northern German baroque style and the Spanish style. This organ is a replica of a Renaissance-style organ at the New Cathedral in Salamanca, Spain, and the first of its kind as a completely Spanish-style organ in Japan.

First built in 1558 at the New Cathedral of Salamanca, the original pipe organ deteriorated over time and most of the keys were left mute for a long time. However, with the support of Gifu Prefecture and many people in Japan and Spain, Mr. Hiroshi Tsuji, a reputed organbuilder based in Shirakawa town, Gifu, succeeded in restoring the organ and its "angels’ voices." This passion of peoples across borders led to cultural exchanges between Gifu and Salamanca, and resulted in the building and installation by Mr. Tsuji of a wonderfully beautiful replica of the organ restored at the New Cathedral at Salamanca Hall in Gifu, as Japan's first genuinely Spanish-style organ.

The three statues of angels playing instruments atop the organ are a donation from Mr. Angel Poveda, painter from Salamanca, and his wife; Tomás Luis de Victoria Choir of Salamanca*; Shirakawa-Pistoia Friendship Association**; women volunteers of Shirakawa; and many others. Finely sculptured in oak wood by the workshop Orejudo in Salamanca, the angels are modeled after those adorning the original organ of the New Cathedral of Salamanca.
* A choir of the Pontifical University of Salamanca.
** From cultural exchanges developed between the people of Shirakawa and Pistoia, Italy, after the restoration of several historic Pistoian organs by Mr. Tsuji who had his workshop in Shirakawa.

Overview of the Pipe Organ

Structure and Components of the Pipe Organ

Inside the pipe organ

The three stone reliefs decorating the foyer of the Hall are modeled after the entrance on the facade of Salamanca University and the New Cathedral of Salamanca, arranged by a designer inheriting the traditions and techniques of Salamanca. The reliefs were carved of Villamayor stone by eight masons who worked on them for three years. 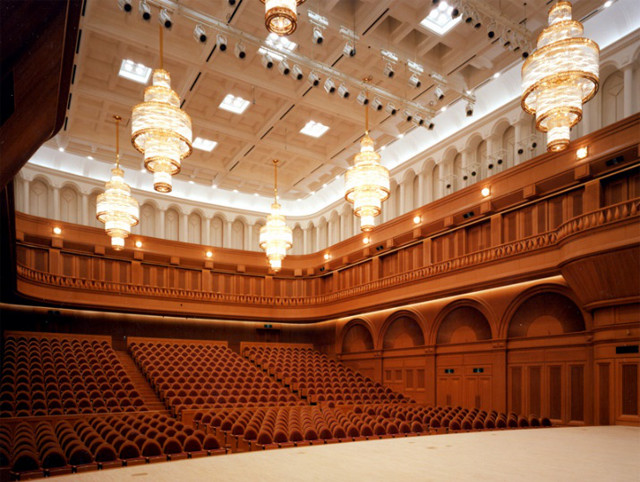 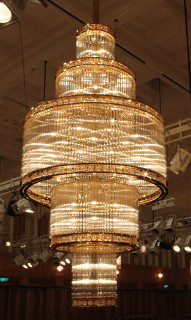 The giant chandeliers hanging from the ceiling are 6.7 m in length, 2 m in diameter, and 650 kg in weight. They were designed by Ms. Motoko Ishii, an internationally acclaimed lighting designer, and are inspired by Gifu lanterns, a traditional craftwork of the region.

Dating back to 217 BC for its origin, the city reached its peak of prosperity in the 16th century. The old section of the city, now registered as a UNESCO World Cultural Heritage, was known as a “little Rome” in antiquity and still preserves many historical buildings from that time. The Tormes flowing through it is another feature that Salamanca has in common with Gifu, through which also runs the clear streams of the Nagara.

Las Catedrales de Salamanca consists of two cathedrals, the old one (la Catedral Vieja) and the new one (la Catedral Nueva), completed in the 13th and 18th centuries, respectively. The two soaring steeples of the New Cathedral are a symbol of the city.
The Cathedrals’ buildings, entirely made of stone, were built over a long period of time, about 100 years for the Old Cathedral and about 200 years for the New Cathedral.

Alongside the Universities of Bologna, Paris, and Oxford, la Universidad de Salamanca is one of the world’s oldest universities. Opened in the 13th century, the university has kept its tradition as a hall of intelligence to this day. It is said that Christopher Columbus, too, consulted a professor at this university about a sea route to India before embarking on his voyage to the New World.